Today was the last Sunday of the 8 race Winter Warm Up Event.  We had 9 boats enter the event, of which 6 took to racing today.

Gosh it was chilly !!!!  We had a 10-12mph North Easterly (rare) but brought a heck of a windchill with it.  It was dry though with just a few snow flurries to cheer us along.  I can’t actually write much about the first race, as Howard was “slightly late out of changing room” – ha ha ha ha !!!!  …..putting paid to our chances of winning the event!  So we started about 2 minutes late and ran hard to catch up….. I have a feeling that across the line first were UK National Champions, Simon Kneller and Dave Lucas.  They may have been denied a win for all sorts of rule reasons, and John and Helen are awarded first in this race.

Race two was excellent as we were given first in the sequence!!  Stephen and Nigel just disappeared into the distance in this one – a superb show. John and Helen were second, and Howard/Richard third.  Simon and Dave retired when in fourth – a new mast was causing challenges!!

So overall, the Regatta went to John and Helen.  Howard and Richard were second, Charles and David were third.

Afterwards, Nigel King ( www.nigelkingyachting.com ) ran a superb FF workshop on the new Racing Rules.  Learned a lot there !!  Plus it was a great way to warm up…..

Well, if you set aside the freezing temperatures, continual driving rain, the threat of snow – then conditions were quite seductive at Datchet today. The breeze was a lovely 12-15mph, with the occasional fun gust on top – plus with Charles racing, you didn’t even have to remember the course (which was pretty accurately laid by the way!). We had five boats on the slip, but only three boats finished race one.

The line was pretty square and the fleet got out of the gate in pretty much the same order that they finished. That isn’t to say that there wasn’t a whole bundle of fun going on between John and Helen, and Howard and Richard for second place.  At the three sail reaching finish there was half a second between them.

Funnily enough, race two went the same way – with a tussle for second right at the last few metres. Great fun!!  However, John and Helen got it both times!!

A brilliant day at Datchet today!!  It was around 5 degrees by mid morning, and amongst intermittent bursts of sunshine we had 12-15 knot breezes with some stonking gusts – fabulous stuff!!

After a sleepy couple of Sundays where snow and ice won over turnouts, we had ten teams racing today – Brett didn’t sign on – tut tut !!!!!!  So a great fleet, and a pretty good course actually.  The wind was smack on to the new jetty and northerly, and they set about as long a beat as they could for that direction.

The start of race one saw us all a bit conservative on the line, I’d say. Ian Linder, this week with Kevin Sweetman, made a corker of a port hand flyer at the pin and popped into a useful lead not to be challenged. Second up were Howard and Richard in 3934 and these two teams finished way ahead (1 minute) of the pack – led by Charles Apthorp and Mark Firth who came in third. The beats were shifty as can be, and got more challenging as the morning progressed (see below!!) , and the reaches were just sparkling, fizzing, rides. Super stuff!!

Race two’s start was an altogether more aggressive occasion – back to our normal fleet standard. Ian and Kevin again did a port pin flyer – this time with just a few feet to spare over The Stensons and Richard/Howard.  The fleet generally went right… going left had served Howard/Richard well in Race one so they set off in about third looking for the wind-curves to ride. Well – ha!!! Ian Linder nipped around first I think, Howard and Richard turned in last !!! So much for that then!!!  The beats aboard our boat were difficult to read, but the reaches a great chance to make places – well, when it all worked!!   Charles/Mark won this one around 7 seconds ahead of Ian/Kevin… pretty close… with Dom and Non-Dom an excellent third.  Hilariously Howard/Richard were all over the place, then shot up the third beat passing John/Helen and Nigel/Stephen in the process – only to pop the kite up and instantly fall over – for reasons unknown… a bit like the reasons for doing so well on beat three….  Anyway, that penultimate reach proved to be a corker. Following on from scooping up 1,000 gallons of water 3934 was a little slow over the surf and John/Helen were taking huge chunks out of them. The last reach was a real thriller and although Charles and Ian were rested up we had great racing down the back of the fleet!!! Spray everywhere and great gusts of breeze falling on us like huge slabs of rock!! Whooshing stuff!!!

Unfortunately one half the fleet (our half) were unaware that the PRO was going to set a third race today and headed for chips.  We were on the new jetty before we clocked that we were missing some fun. Brett joined in, sailing with Mike Clapp, and this one was one by John/Helen over Ian/Kevin by just six seconds – that’s a win by a head basically. The breeze was sparkling by this time and the lasagne was pretty excellent too.

One bit of disappointing news was that we had a spot of theft in February – The Stensons had their top swivel pinched. A pretty pricey bit of kit actually.  It is ages since we had problems like this.  It’s not quite in the same league as stolen trailer ropes is it? Obviously a fellow DWSC sailor helped themselves and not a member of Joe Public on a stealing spree. It leaves you with a queazy feeling, doesn’t it??  Apparently someone had enquired after a new swivel at the Chandlery a couple of weeks ago – hmm…. you’d forgive The Stensons for thinking it might have been him…. 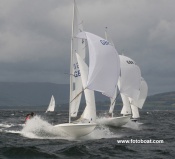 Click Here to See Where You Stand in the Current Series

Click to See where you Stood in the Previous Series